ASSAP was founded in June 1982 near Parma (Italy) with the participation of almost half of the producers then present on the Italian market. The guiding idea was to promote and enhance the prestige of the prestressed hollow core floor.

Soon after its creation, ASSAP turned to Prof. Franco Levi of the Politecnico of Turin, for his expert advice. He strengthened the scientific basis of the engineering techniques and applications that the Association’s proposers had previously developed and shared with all ASSAP members. 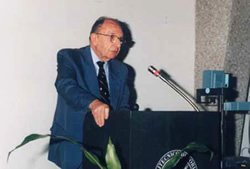 From 1982 to 1986 the testing laboratory of the Politecnico of Turin directed by Prof. Pier Giorgio Debernardi devoted its energies to the experimental testing of the restraint of continuity established between hollow core floors on several supports by means of normal reinforcement resistant to negative moment and inserted in situ in the slab ends prepared specifically for the purpose.
The second task was the study of the mechanical model to explain the unexpected experimental behaviour of the restraint of continuity between hollow core slabs during the cracking phase. Effectively, once the positive and negative moments of cracking had been reached and passed experimentally in the laboratory, it was noted that these cracks never joined one another and thus caused no structural collapse.
It was found that cracks remained separate owing to the presence at the ends of the arch and tie system of compression struts in the concrete (see Manual Fig. 4.10 in Chapter 4) which inhibited their coming together. Thus collapse is avoided in the cracking phase.

Thanks to this formidable and reassuring scientific diagnosis, Prof. Levi opened the doors to Italian, and later European, Codes dealing with hollow core floors laid in continuity.

Among the many innovative applications introduced by ASSAP we also find the clear span connection between hollow core slabs and bearing beams cast in situ (see Manual paragraphs 4.4.2 and 4.4.3).
What are the conditions within which these connections can be assured without support?

Once again it was the testing laboratory of the Politecnico of Turin that addressed this new research challenge through the construction of beam models, both depressed and in floor thickness, cast in situ, with hollow core slabs in continuity but not lying on the beam itself. Results of the tests confirmed the validity of the engineering idea, although with the limits and precautions dictated by Prof. Levi (see Manual paragraph 4.4.4.).

The last research project, which dealt with spalling stresses (see Manual paragraph 3.5.2), required a three-year effort. If in normal prestressed beams vertical tensions in the web-end are absorbed by the specific stirrups, in hollow core slabs they must be opposed by the tensile strength of the concrete alone.
Spalling stresses must also be specifically restricted if the hollow core slab is inserted as a clear span between bearing structures cast in situ.

For further information or to request a copy of the manuals